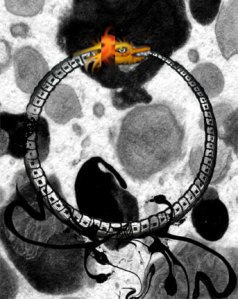 I consider myself a rational man (stop the sniggering at the back). A man who tries to believe in overwhelming evidence rather than belief for belief’s sake. Yet many of the things i hold true, when deconstructed, fall to only mere belief. I think this could be said of almost anything. There will almost always be an element of doubt or small chance that an alternative idea is possible. Ultimate rationality KNOWS  that rationalism itself dictates that irrational-ness is ultimately perfectly possible.

One of the simplest most beautiful elequent precise reasonable ‘theories’ to which i can almost say i have feelings akin to love about is that of evolution. I believe in this as much as i am prepared to believe in anything. Yet…….. and here’s the rub, there is the chance, as small as a gnats after dinner mint, that spod-the-almighty-ever-seeing-eye-the-alpharomeo-the-omegatron-the-light-the-dark-the-fiddas-crispy-pancake-atron DID throwdown all these false clues just to fuck with our tiny minds. I certainly dont believe that but it, unfortunately (using rationalism), is a possible outcome. The fact that through rational thought you must (to some small degree) admit that irrationalism is a viable reality is like using maths to prove that maths cannot exist. But what else do we have to decode this chaotic ol world hey?

There is a sublime ridiculousness to it all, a beautiful freedom,a release, a letting go of long grasped at ‘truths’, because at the end of the day we aint going to know in this life, fuck it i say. Give me happiness over ‘truth’.

Rationalism is like a snake eating itself from tail end up. That slithery little fucker is full and fed and feeling just fine……. for a while.