The Distraction: Audition and wardrobe.

Host: “The Distraction was the second individual to attend the auditions. The envelope picked had ‘Obscure and Surreal dreamer’ written on it. Once opened, it became clear her set was to be the spare room. Her approach was fairly interesting. She’d decided to bring props of her own. These consisted of taxidermy cats, black fabrics, a stringed musical instrument and some sort of white malleable substance. At first I thought it was egg whites that had been whipped to peak state, however it was hair moose. (female name) left the room after a duration of 7 hours. When we entered it wasn’t clear what had taken place. A tripod was left in the centre of the room and one of the windows was wide open. It became clearer what had taken place once we developed the film in the camera.” 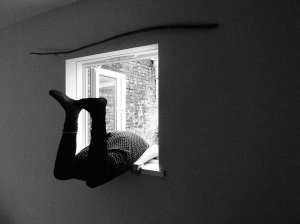 The Distraction “I guess I like hair moose and egg whites as they have a life of their own. It’s just something in the way they expand.”

The Host: “God I loved how simple the Distractions wardrobe was. There must have been about 11 of these black hooded garments. It started with the black hooded cloak from her audition, but we ran with the theme of the ‘black hoodie’ and ended up adding oversized black hoods to everything (female name) had to wear. It became her signature, and now a fashion statement.”