A Napkin has been nailed to the flat door. It is florescent green in colour and is attached by 4 silver pins, one in each corner.  It is another invite. It is to be remembered for later in the play. 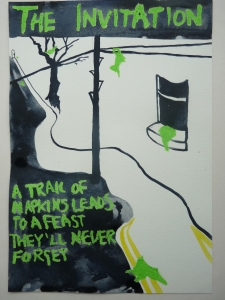 A possible poster for, The Invitation. Water colour and oil on paper.

Distraction: “I intend to do something here, by the side of the pool. A sort of live performance sculpture. It will comment on debauchery in an obscure and surreal fashion.”

The novelist nods once with his head unemotionally. He has been listening to the Distraction talk for about hour and not said much himself. He is not bored. He has his mind on other things.

Novelist: “That’s all very well, but how do we intend to get them here?”

Distraction “I thought they should follow something.  A trail of some sort.”

Novelist:  slightly sarcastically “A trail of some thought.”

This amuses both the Distraction and the Novelist. They laugh at this for about 5 seconds. Cue dream sequence.

The Invited is been followed. The set is made up of a series of corridors with door like openings. The invited and Follower are in complete darkness. The Invited moves along the corridors as silently and carefully as she can. The invited turns a corner and follows the wall at an angle with her hands until she hits some form of foliage. This foliage creates a sound amongst the silence. The Follower is now aware of her position. Within the darkness they collide still unable to see each other. The invited moves swiftly away as the follower reaches out capturing nothing in his grasp. 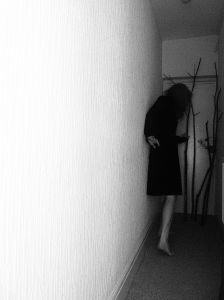 Images taken from the dream sequence scene. Use of night vision camera.