Google Earth zooms in on a part off the Avenue of the Blossoms. This green gap and breathing space consists of a couple of trees, three bushes and a patch of grass dug up by dogs and cats. The lights beneath the foliage seep green shadows upwards, into the air and on the walls of dirty buildings.

Between large building boxes (cells of urban life) and its inhabitants stands the smaller, square apartment block with its four floors-a dwarf sitting amongst the giants, off the avenue into a diagonal side street. Its green oasis is its saving grace.

Large, wide dark wood planks fence each balcony in, which in some cases hosts two flats with a partition wall. In playfulness each balcony has a different colour lighting. Lit up in green, blue, yellow ,red and orange they make the building look like an experimental urban installation.

Music and cigarettes swirl up into the sky. You sometimes see someone sitting out there, if you walk past the ground floor. You sometimes don’t see a soul. And if you hang from the balconies above in curiosity the sound and nicotine may be you only human contact in this urban loneliness.

Sitting on the edge of a messy bed in the smaller third floor cell is a young woman. She peels off three layers of sheets left by some previous visitors. She cleans. She makes her bed. Gasping for fresh air in thirty six degrees she steps outside onto the balcony. Viewed from above she seems slighter and smaller. ‘You could just crush her in you arms with love’, he thinks hanging above her.

Back in her flat lingers his presence. ‘One room flat in central apartment block available for one month: single bed, a tiny toilet and kitchenette’, said the ad. The built-in bookcase hangs empty parallel to bed just by the entrance. A stale packet of Lucky Strike messes up the abandoned landscape. Across the wide balcony glass door is a smaller door frame which leads to a corridor. On its right end is the kitchenette with a ventilation window and on the left another door leads to a toilet- a shower head hangs above the loo and a miniscule sink fits in the corner.

At dawn the landing planes shake through to your heart in sleep. During the day the air is thick and grey. During the night it all sparks up with chatter, light up streets and passer bys – it just feels magical , filled with mystique and promise.

It’s gone past nine at night. He’s curious and lonely. The music flows from the third floor-something upbeat, full of excitement, it teases of beginnings. He walks out and leans over balcony railings hoping to spot her. He walks back in . She washes, puts a fresh dress on and wonders what the man that walks above her with these stomping feet might be like. Out on her balcony she sits close to its edge, slight twist of torso, a furtive upward glance in vain.

‘Quarter past nine’ says the radio as he walks outs. He locks the door and so does she. He turns his head towards the lift as she presses its button. Nine seventeen. They both leave waiting to meet. 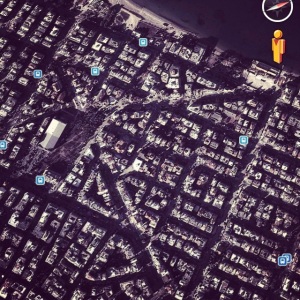