To the collection of recurring dreams: train dream.

The unpredictable train dream has returned and had the subject tensed and sweating for hours on end.
At times he would jump speeding trains on the way to safety – the leg movement suggested a repetitive springing action, followed by the arms grabbing air, holding on to invisible ladders.
Other times he would be a running late at busy stations in fancy cities – a frowned forehead seemed to confirm the state of devastation. 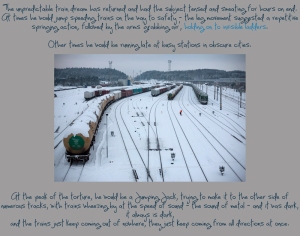